By Foodie Pat on January 16, 2016 in At Home, Gadget Talk, Hints and Food Philosophy, Uncategorized 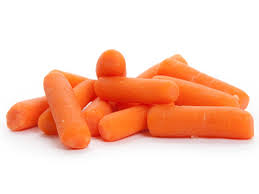 Excerpted from The Washington Post article by Roberto Ferdman, 1/13/16

Mike Yurosek, a carrot farmer from California, created a produce sensation. He called them baby carrots, really large and misshapen carrots that had no beauty for a retail customer.

“It’s hard to overstate the ingenuity of the baby carrot, one of the simplest and yet most influential innovations in vegetable history. The little carrot sculptures (or baby cut carrots, as they’re sometimes called to clarify) not only revived a once-struggling carrot industry, but they also helped both curb waste on the farm and sell the Vitamin A-filled vegetables at the supermarkets.

The baby carrot, like so many inventions before it, was birthed by necessity.

In the early 1980s, the carrot business was stagnant and wasteful. Growing seasons were long, and more than half of what farmers grew was ugly and unfit for grocery shelves. But in 1986, Yurosek, itching for a way to make use of all the misshapen carrots, tried something new. Instead of tossing them out, he carved them into something more palatable. At first, Yurosek used a potato peeler, which didn’t quite work because the process was too laborious. But then he bought an industrial green-bean cutter. The machine cut the carrots into uniform 2-inch pieces, the standard baby carrot size that persists today.

When Mike Yurosek & Sons, Yurosek’s now-defunct California company, delivered his next batch to Vons, a local grocery chain, he included a bag of the new creation. He suspected he was on to something but hardly anticipated such an enthusiastic response.